Our research had paid off. It was gloriously sunny – blue skies everywhere with only a dusting of clouds here and here. This was perfect. As I’d freaked out on day 1 with Via Ferrata Michielli Strobel, we’d thought it would be a better idea to start me off a bit gentle, so on todays agenda was Sentiero Gustavo Vidi Ferrata – a really nice traverse hike, with only a couple of places where we’d need to clip-in to manoeuvre the ‘tricky bits’ here in the northern Brenta group.

We drove over to Campo Carlo Magno, and got ourselves a cablecar all the way up to Passo del Groste to Rifugio Stoppani, a hut that’s located high on the plateau at 2500m.

At the top, the weather could not have been any better, sun was blasting, and Gina’s shades were out in full force.

From the hut, we headed over towards the trailhead signs, and followed the trail as it began to steeply climb into a pass on the Pietra Grande ridge. The ferrata started with a nice sign telling us to secure ourselves, and plenty of photo ops. as we had an insane vista towards Cima Grostè and the central Brenta peaks.

Once we reached the highest point of Sentiero Vidi, we traversed across the western side of Pietra Grande, and for a couple of hours, we were having a great time climbing ladders and cables, and admiring the fantastic landscape.

Iest and a glacier!

Once we were out of the ferrata bit, we settled down on a nice mountain edge for some lunch, and just admire the views. From here, we hooked around the mountain, and up to Bocchetta dei Tre Sassi (2614m), where we were greeted with even more impressive views of the valley below, where more photos took place!

Once the photoshoot was over, we started to make our way back down to the lower of the two huts, which was a bit of a mission through all the loose rock – but! we were however pleasantly surprised to hear a beautiful sound in these mountains, a Svist!! (Marmot!) As we were walking down, she was just ‘svist’ing’ the whole way across the valley, to warn her pals that two no-gooders like us was in the area, creating havoc! It was really nice, and made me fell in love with Marmots.

The hike down was a bit of a mission, but thankful we managed to make it down to Claude, who was waiting nicely for us. We continued down the valley to try and find us a nice camping spot for the evening, and found a great one over in a small village called Carisolo; Parco Adamello.

The drive down the valley was magnificent, nice winding roads, with plently of lay-bys for us to nip into to take a few snaps on the way down, this is where I managed to take this dramatic photo of the Brenta group in all it’s glory. 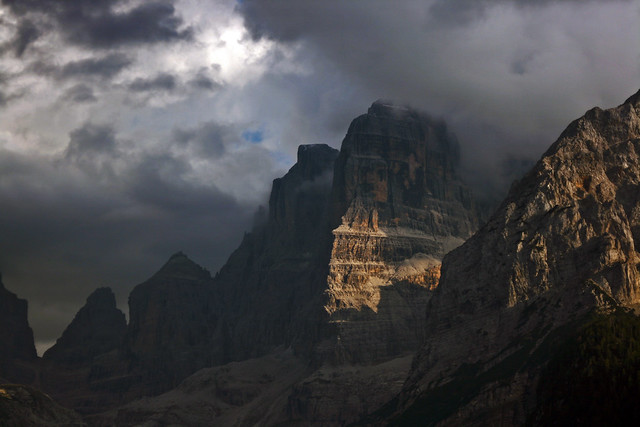 This evening, we were pretty beat from all the activities, and headed into town for an epic pizza, and then returned to the tent with the hope that the weather will still be great for tomorrows mountain activities.

This entry was posted on Thursday, September 6th, 2012 at 17:15 and is filed under Travel. You can follow any comments to this entry through the RSS 2.0 feed. You can leave a comment, or trackback from your own site.